Friendly people at check in and great location. They have a boat ramp/trailer storage and we were able to tie up in back of our accommodations. 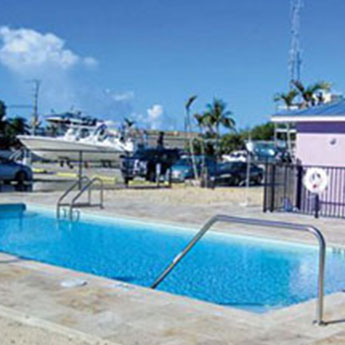 Mangrove Marina, a Destination Resort in the Florida Keys

Article for “ALL AT SEA”. Story and photos by Jill Zima Borski

Owners of the Mangrove Marina in Tavernier, Florida Keys, originally thought they would fix it up and sell it, but they saw its potential and decided to keep it as a long-term asset. Robert Charney said he and partners acquired the marina at mile marker 92 bayside in March 2009 from a bank that owned it after Cay Clubs, which had bought several properties in the Keys around 2008, went bankrupt.

“Mangrove Marina was a working marina,” Charney said. “It catered to residents who were looking for an inexpensive place to keep their boats. They were OK with the state of disrepair of the property. Then, four years ago, we started to address the maintenance needs and fix the buildings and grounds. In the process, we started to attract a clientele that appreciated the better conditions.

“In the past two years, we started to cater to those seeking a destination resort that is water-centric, while not giving up that Old Florida feel.”

A pool and new bathhouse was added last summer. Next, the marina opened a restaurant with tiki bar and fire pit, and also added eight houseboats that people can rent, which run from $150 to $400 a night depending on the season. Barbecue areas enable residents and visitors to gather and enjoy their waterfront lifestyle.

Mangrove Marina bills itself as the largest marina in the Keys because they are a full-service marina with approximately 200-250 boats on property. Boats occupy about 120 wet slips, and more than 100 dry racks for storage. A boat ramp, travel lift, yard services such as painting, and fuel lines providing diesel and gas also are on-site. Yacht Works, a tenant, offers sales of four lines of boats as well as service. The boats are available for sea trial. By the end of this year, boat rentals are expected to be available, Charney said.

Other services include on-site laundry and high speed internet that is password protected per user. Many of the marina residents are full-time, and most of the friendly staff has been on hand for a decade.

“The marina’s harbor is a natural anchoring spot in the event of an approaching hurricane,” said Charney. “It is known as Community Harbor or Safety Harbor.”

Waterfront views from just about every point in Mangrove Marina. Photo by Jill Zima Borski

One resident, Rod Luckin, has enjoyed the marina for a year. He complimented the friendly staff. He said he has sailed and motored all over the state and the islands, and Mangrove Marina is one of the best. Some of the marina residents participate in a potluck supper once a week, where they take turns cooking. He also enjoys the music on weekends at the tiki bar and karaoke, where he has been known to croon a ditty or two. Additionally, he has shown folks how to navigate to the Bahamas.

Luckin said he has sailed for four decades, since his twenties. He sailed Sunfish and Hobie Cats, progressing in length from 27 to 30 to 37 feet. He got married 17 years ago to Leah. They dated five times and knew they were meant for each other. “Leah knows dead reckoning,” Rod said. “We’ve lived on and off our boat for 17 years as well.” Currently, they live aboard a motorboat and share their space with a shih tzu they acquired from the Fort Lauderdale Humane Society. Luckin plans to share his boating and motorcycle travel tales in self-published books.